Cities increasingly tend to compete and a distinct hierarchy exists, which is particularly evident in Europe but is developing elsewhere too. In western Europe the only indisputable world city is London, with Paris perhaps also qualifying, although Paris could still be classified as a (smaller) megacity.

Below them come the national capital cities (see picture below) as well a number of specialised cities which effectively act as commercial or cultural capitals. They are all smaller; typically, their metropolitan areas have populations between about 1 million and 4 million. They compete with the world cities in their specialised functions, such as Brussels, Rome and Geneva for government, Frankfurt and Zurich or Amsterdam for banking or Milan for design. 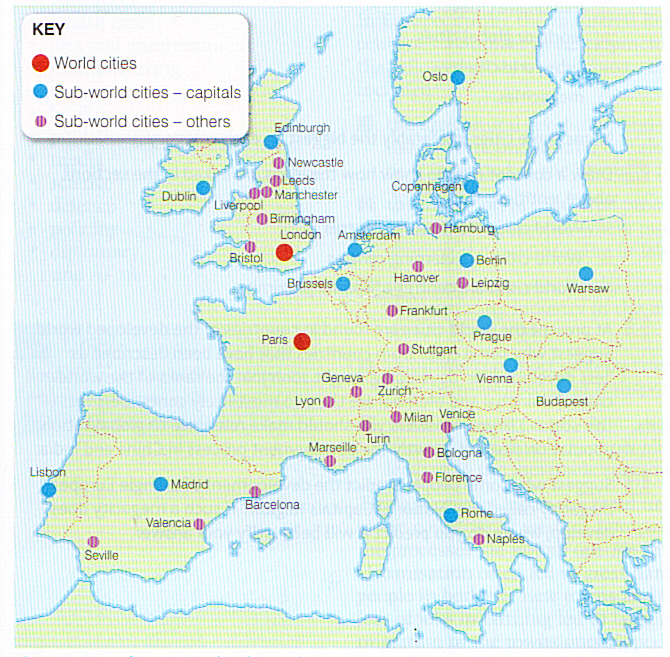 The Eurocities form a tight inner circle forming what the EC’s Europe 2000+ report calls the National Capitals Region – all within convenient radius for face-to-face contact by air and, increasingly high speed train. So it seems certain that they will constitute an effective central core of the European urban system. In turn, they will be connected by regular and frequent air services to a number of key regional cities which effectively from an outer ring some 500-700km distant including Copenhagen, Berlin, Vienna, Zurich, Milan, Madrid, Dublin and Edinburgh. These place will also be connected by high-speed train to cities within their own 500km radii: Milan with Turin, Venice with Bologna Berlin with Hanover, Hamburg and Leipzig, Madrid with Seville and Barcelona – and will thus form the points of contact between the European and the recognised urban systems.

With their typical population range of 1 to 4 million these national capitals and commercial capital overlap in size with the major provincial capitals of the larger European nation states (such as Manchester and Birmingham, Lyons and Marseilles, Florence and Naples). These places typically serve as administrative and higher-level service centres fort mixed urban-rural regions. Most, though not all of them, are prosperous, and they have shown considerable dynamism in adapting to their loss of traditional manufacturing and goods-handling functions. They are all millionaire cites in their own right, or they can be classified as such when taken to include the densely populated urban regions that surround them.